By Kevin R. McIntosh
“How beautiful upon the mountains are the feet of him who brings good news…” Isaiah 52:7

Perhaps no other natural wonder on Earth holds as tempting an allure for adventurers as Mt. Everest. Located in the Himalayas of Nepal, the 29,000 foot-high mountain has summoned the most courageous climbers from throughout the world, including Sir Edmund Hillary. In 1953, the famed explorer became the first climber confirmed to summit Everest.

At a point in life where some men might be satisfied to spend their days watching TV from a recliner, 71-year-old Les is a man on the go. He jogs and bikes several miles each week and works as an auditor for a consulting firm to the U.S. Forest Service. Les also helps run his family’s assisted-living home and plays piano for his church’s Sunday morning worship service. Playing with eight grandchildren occupies any remaining time.

Les and his wife, Jackie, are also members of The Gideons International. A global ministry that reaches throughout the world with God’s Word is a natural fit for the couple. Throughout their marriage, Les and Jackie have regularly dedicated time together for reading God’s Word. “Reading the Bible has always been a big part of our life,” says Jackie. “Les and I try to have devotions every evening. That cements our marriage more than anything.”

The Faith to Climb Mountains

In addition to a passion for reading and sharing God’s Word, another continual theme in Les’ life has been a thirst for adventure. His desire to take on Earth’s grandest peaks began at the age of 14 when he climbed California’s Mt. Lassen with his older brother. Since then, he has climbed more than 35 other mountains.

In 2010, Les faced a mountain of a different kind. Doctors diagnosed him with cancer. He faced that challenge with the same faith and determination that helped him through even the most difficult climbs. After 44 consecutive days of radiation treatments, Les was given a clean bill of health. While he has always made the most of his time, that period of his life provided Les with a reminder that our days here on earth are passing quickly.

Over the decades, Les has made many of his climbs with his close brother in Christ, Joel. The two met in military boot camp and have climbed together since. In early 2016, Les said to Joel, “You know, if we’re ever really going take on Everest, we should probably do it soon.”

Jackie didn’t try to talk Les out of his Everest expedition. Instead, she took her concerns to the Lord.

Any wife would have reservations about her husband flying across the world to trek thousands of feet skyward to reach a mountain with a reputation as perilous as Everest. The fact that her husband was approaching his 71st birthday gave Jackie even more reason for concern. However, Jackie didn’t try to talk Les out of his Everest expedition. Instead, she took her concerns to the Lord.

Jackie knows her husband can become very determined when he has his heart set on reaching a destination. A few years ago, the couple traveled to Eastern Europe and eventually reached the heavily guarded border of Ukraine. Les was determined to set foot into the country. Jackie still remembers seeing her husband seemingly unafraid of the fact he was surrounded by guard dogs and border guards with drawn weapons. His friendly demeanor persuaded the guards to allow him to take a few steps into the country and capture a picture for his photo album.

While Les has made some extremely challenging climbs, including a five-day trek up Mt. Kilimanjaro, he made those excursions when he was a much younger man. Thus, with a healthy awareness of their abilities, Les and Joel set their goal to climb to the first base camp of Mt. Everest.

After researching the various Everest expedition options, Les and Joel found a tour package that met their budgets. They coordinated their schedules and set the date for September.

Les has been active throughout his entire life. However, he knew to climb to Everest he would have to train harder than ever through the summer. He ratcheted up his standard fitness routine of jogging three miles, three times a week. Also, he incorporated practice climbs into his regimen, including Mt. Defiance in Oregon and Mt. Adams in Washington. By September, he was ready for Everest.

The Ups and Downs of Climbing

If seeing the grandeur of Everest through the passenger windows of a small plane flying into Lukla, Nepal, doesn’t get the heart beating faster, then landing at Lukla’s Tenzing-Hillary Airport will. High winds, dramatic elevations, cloud cover, and a short landing strip that dead-ends at a rock wall are just some of the challenges to a safe arrival in the village. This airport is where Les and the other climbers would begin the eight-day ascent by foot up to Everest. The journey would take them in the steps of Sir Edmund Hillary, routing them through Sherpa villages and Hindu shrines nestled along the 40-mile trek.

Les and Joel would be led on their climb by two guides. They were also accompanied by two Sherpas, an ethnic group indigenous to Nepal, known for their innate ability to ascend to the peaks of the Himalayas. Two younger climbers were attempting the climb with the team, as well. 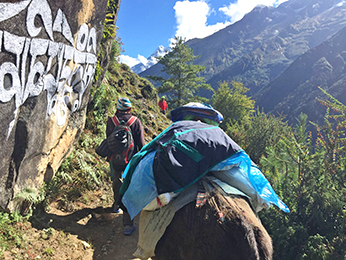 It didn’t take long for Les to feel the enormity of the challenge he had undertaken. The first day, cold rain poured on the team as they slogged up the mountain. Snow fell on them for three days. The exhilaration of having begun the climb quickly faded into the reality of why the trek up to Everest isn’t for the faint of heart. Les was starting to understand why the hundreds of other climbers they encountered on the trek were 30 or 40 years younger than he and Joel.

Questions began to run through Les’ mind. Why am I putting myself through this? he wondered. What if I don’t make it home alive?

The majesty of Mt. Everest and the surrounding Himalayas overshadows any preconceptions one may have formed from photographs and movies. To set eyes on such breathtaking magnificence in person is to understand why Everest is designated one of the seven wonders of the world.

“When you see how gigantic it is, it’s very humbling,” says Les.

There would be times when the team would ascend 1,000 feet, only to then descend 500 feet due to natural obstacles. Ups and downs like those can contribute to ups and downs in the mind and spirit. Les began the climb with a slight injury to his left foot. Early into the ascent, he slipped off a rock and injured a finger. On a multi-day trek in the Himalayas, even small injuries can put a climber at a serious disadvantage. Carrying a heavy backpack also adds to the challenge. Questions began to run through Les’ mind. Why am I putting myself through this? he wondered. What if I don’t make it home alive?

The mental challenges to climbing can be compounded by the lack of oxygen at high altitudes. Mild altitude sickness can result in dizziness and fatigue. Each evening, the Sherpas would use an oximeter to check each climber’s oxygen levels. If a climber’s levels were getting dangerously low, the climber would have to turn back, as severe altitude sickness can be fatal.

When the body is put through a task as physically demanding as the climb Les was on, food and rest are more important than ever. The primitive shelter and limited food options on the trek are less than ideal for fully restoring the body for its next day of climbing.

Back home, Jackie was faithfully praying for her husband’s journey. Les, meanwhile, kept himself spiritually fed with passages of Scripture to meditate on. One of those passages was Psalm 121:1-2:

I lift up my eyes to the hills.

From where does my help come?

My help comes from the Lord,

who made heaven and earth. 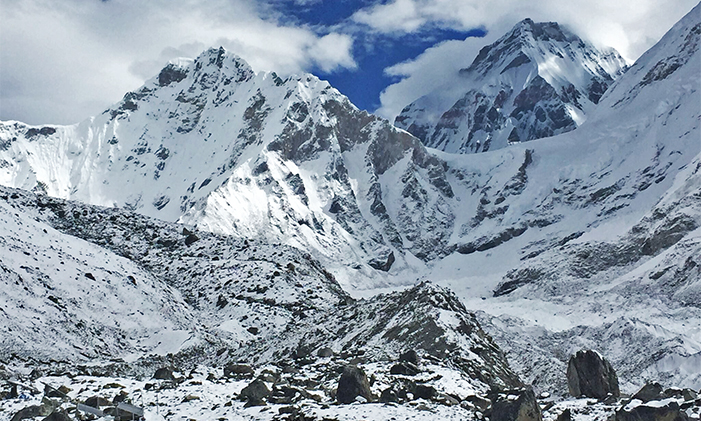 “…It was sobering to think, God just spoke the Word, and those mountains sprung up into existence.”

When Les and Joel encountered spectacular sites along the climb, the two friends would stand in awe and wonder at God’s creation. Says Les, “It was a very humbling feeling to experience that miraculous presence of the Lord. It was sobering to think, God just spoke the Word, and those mountains sprung up into existence.”

Each evening, when the climbing expedition settled down to rest, Les and Joel spent time reading God’s Word and praying together. Les packed a few pocket-sized New Testaments, and by the end of the journey, the Lord had provided opportunities for those Testaments to be placed into the hands of others. 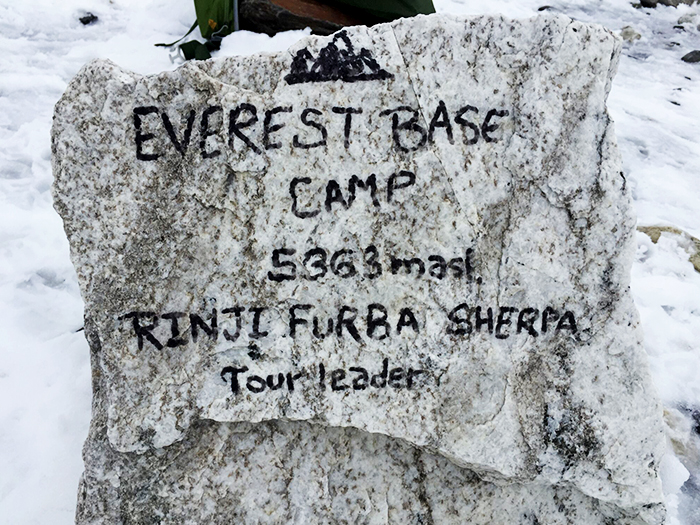 On the eighth day of the climb, the team reached their destination–the South Base Camp at Mt. Everest. Standing high in the clouds at an altitude of 17,598 feet, amidst an array of colorful Nepalese prayer flags whipping in the arctic wind, Les felt the satisfaction of accomplishing something few people ever will.
“It was a huge sense of relief,” says Les. “Reaching Everest was by far the greatest challenge in my life.”

The members of the Rogue Valley South Camp in Oregon were thrilled to see Les return home safely. He and his camp members are staying busy placing and distributing God’s Word throughout the community. “It’s so rewarding to go to the schools, hospitals, motels, and county fairs, sharing God’s Word,” says Les. He also loves that he can use his gift of administration to serve in his camp. “For me, it’s the perfect ministry. It just fits well with my personality.”

Jackie says she counts it an honor to serve in the Auxiliary, noting that her mother was among one of the first women ever to receive a nurses’ New Testament while serving in The British Isles during World War II. She is thankful for the friendships she and Les have made with Gideons and Auxiliary throughout the world.

Les is continuing his fitness routine of jogging and bicycling, saying he wants to be prepared for any future opportunities the Lord has planned for him. He says it’s as important as ever that he make the most of his remaining days. According to Les, as long as there is breath in the lungs, a Gideon or Auxiliary can always find an opportunity to make a difference for the Lord.

“The way you make it to the top of a mountain is inch by inch, and that’s how we are to go about trying to reach the world with the Gospel.”

“The clock is ticking fast. We have to use the resources the Lord has given us and do what we can before time runs out. As Gideons, we look out on the field that’s white with lost souls that have never been reached by the Gospel,” says Les. “The enormity of trying to reach all those people with God’s Word can seem impossible. The size of the challenge could easily make one want to throw both hands in the air and give up.”

“But the way you make it to the top of a mountain is inch by inch,” says Les, “and that’s how we are to go about trying to reach the world with the Gospel.” 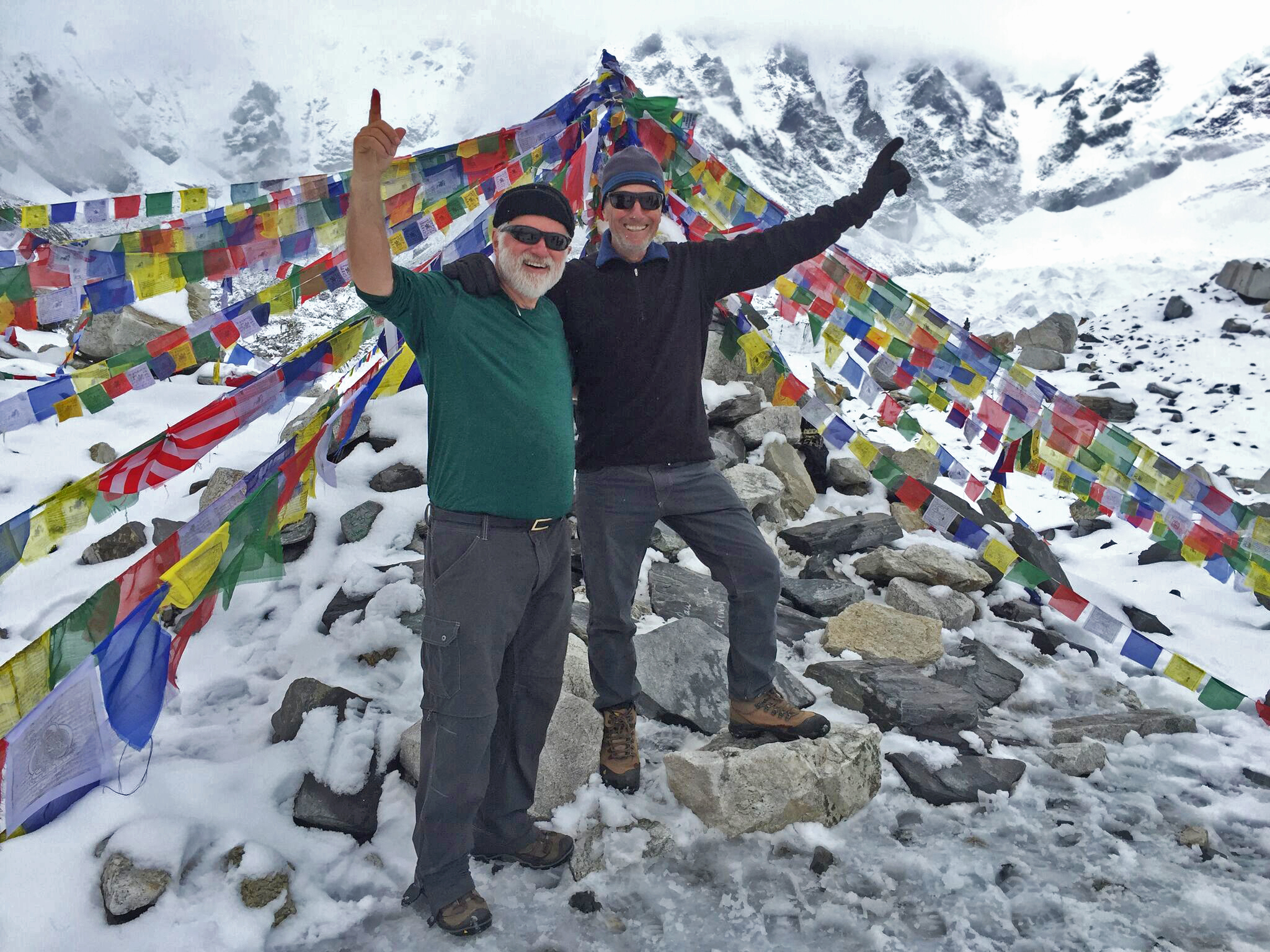