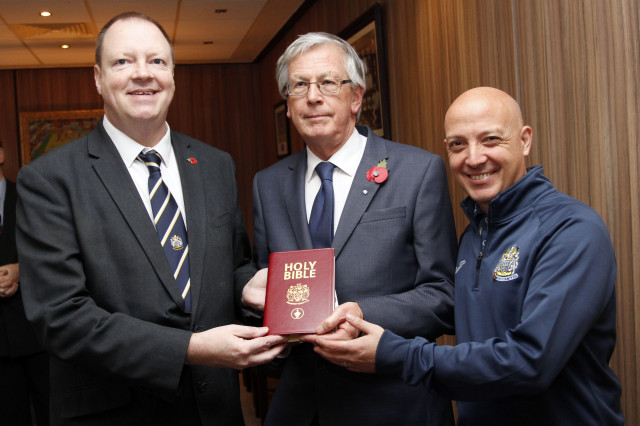 Fans of Stockport County Football Club were streaming into Edgeley Park in eager anticipation of their cup tie with the visiting Woking Football Club in the second round of the FA Cup. However, most of the fans would have been unaware of a unique event which took place earlier, at 12pm in the Club Boardroom, and would never have dreamt that there might be a special verse in the Bible for footballers!

Bill Watson of the Manchester City Branch then presented the Rev. Billy Montgomery, Club Chaplain, with a similar badged Bible and pointed out the ‘footballer’s verse’, Philippians chapter 3 verse 14, where the Apostle Paul says: “I press on towards the goal to win the prize for which God has called me heavenwards in Christ Jesus.”

James Gannon, the Team Manager of Stockport County, gave his appreciation of the gift of special Bibles to the Club and departed to complete the preparation of his team for the afternoon’s match.

The Gideon members stayed on to enjoy the match but despite playing very well, Stockport County sadly succumbed to a 4-2 defeat by Woking.

The presentation had been made possible through Gideons’ contact with Hazel Grove Baptist Church and their minister, the Rev. Billy Montgomery, who also happened to be the Chaplain to Stockport County. After Billy had gained the Club’s consent, two Bibles and 100 New Testaments & Psalms were printed on the front with the Club’s crest and a Club prayer inserted inside. Billy, in the course of his work as Chaplain, will be able to present the team members, club employees and volunteers with their special badged Testaments.