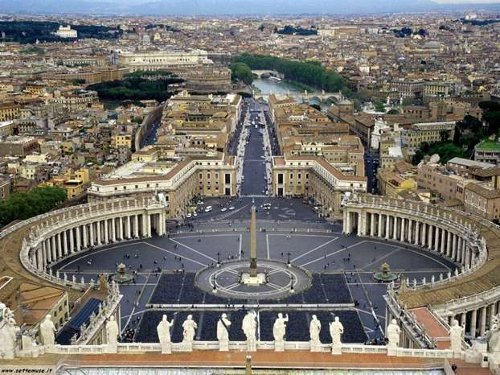 Our ministry was organized in Italy in 1965 and since then over nine million Scriptures have been distributed there through The Gideons International. The country is a heavily saturated in very traditional Roman Catholicism, which over 80% of the population claims as their religious affiliation.

This Scripture blitz in November covered the metropolitan city of Rome and its surrounding areas. The primary focus for this blitz was to distribute God’s Word to high school students and around the campuses of multiple large universities. Reception to the Gospel was more difficult with college students as many refused the free gift offered by visiting Gideons. However, the Holy Spirit used these opportunities to reach hearts in unique ways.

Renato Attorri, a Gideon member from the area, had an opportunity to speak with a philosophy student for over an hour as they debated over the Word of God. While the Gideon engaged the philosophy student in conversation, another student waiting for her bus nearby was following along and reading her own New Testament intently.

Another student who received a Scripture on his college campus, opened the book and began reading it immediately. One of the Gideons began talking to the young man and found out the student was a Muslim, who shared he could not read the Koran in Arabic, but he was excited to read the New Testament in Italian. Praise God for His transcending all languages and cultures.

“You have to leave immediately!” Giovanni Bruno heard these words as he was sharing New Testaments with passing students at the main entrance of the Mathematics and Science Department of a local university. Bruno asked the officer if he had received a copy of the New Testament.

The officer said he had received one the previous day while outside the Engineering Department. He added that he gave the book to his wife, who was a frequent reader of the Bible. Bruno then asked if he would like another copy. While he was still thinking whether to accept the gift or not, Bruno wrote a dedication in the front of the New Testament and presented the officer with the book.

However, the officer’s face softened as Bruno promised he would pray regularly for his family. Tears came to the officer’s eyes, and he allowed the Gideons to stay and continue the distribution on school grounds.

God’s message always gets through through your prayers and support. The international team had selected Isaiah 6:8 as its theme verse: “And I heard the voice of the Lord saying, “Whom shall I send, and who will go for us?” Then I said, “Here I am! Send me.”

The team believed this verse through every opportunity to share God’s Word during the blitz, and we join with them in praising God for the almost 25,000 Scriptures distributed in and around Rome that week. Please share our blog with others you know today as we continue our world tour in 2016.