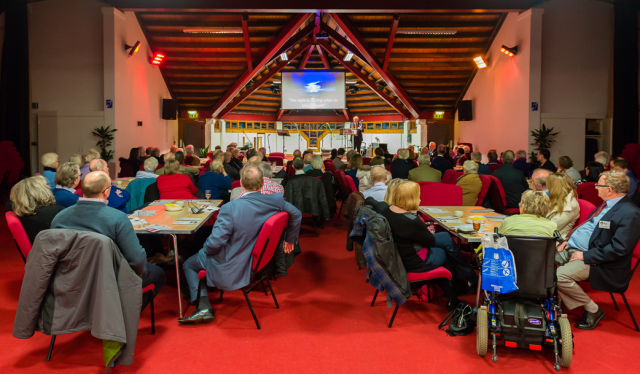 Up to 90 people attended Aberdeen Branch’s 50th Anniversary Event held on the 19th Nov 2015. A number of former members who have moved south or retired joined us, along with some of our Friends and others who had been invited to come along. Some of the Zone 1 Cabinet also attended.

The Guest speaker was Bill Thomas our International President who gave a very encouraging and challenging address about the Good News in a world full of bad news. Bill reminded us of this window of opportunity to share God’s Word. He encouraged us with his experiences of answered prayer, and how people have responded in many countries he has visited of late to receiving a Gideon Bible or Testament. He illustrated his address with many pictures from his travels, showing boys and girls, men and woman gladly receiving the Word of God.

The evening included a local update of the Branch’s work and emphasised how those not involved in the Gideon Ministry could get involved by becoming Friends or joining as Members. Many people signed up as Friends on the evening and a number are considering membership. Local members intend to follow up those who are considering joining as members.

Please pray for the work in Aberdeenshire that doors will remain open and that God will bless the placements of His Word as He calls boys and girls, men and women to repent of their sins and come to a saving faith in Christ.