In April, Gideons and Auxiliary in Paraguay held an International Scripture Blitz in the capital city of Asuncion. The Asuncion metropolitan area is home to over 2.2 million people, most of whom are Roman Catholic. Less than five percent of the population is considered evangelical Christian.

An international team of Gideons from the USA and South Africa traveled to Paraguay to assist their brothers and sisters in sharing God’s Word during the one-week blitz.

There was great excitement to see how the Lord would show up throughout the week as Gideons and Auxiliary would share God’s Word in Asuncion’s schools, universities, jails, hotels, hospitals, military installations, and police outposts.

Pat Corkery was the blitz team leader. He joined The Gideons in 1982 and is a member of the King County South Camp, Washington. A retired senior manager of the Federal Aviation Administration, he has served in a number of blitzes including Italy, Madagascar, Burkina Faso, Albania, Venezuela, Indonesia, and Singapore.

Pat was very inspired by the outstanding planning, preparation, and teamwork accomplished by Gideons and Auxiliary in Paraguay. Such planning helped the teams share more Scriptures that week than they could have otherwise. When torrential tropical rains flooded streets and caused many schools to cancel classes, teams still worked through the challenges and managed to place and distribute God’s Word.

Paraguay’s Auxiliary was also strongly represented throughout the week. One Auxiliary who is a professional optometrist helped open doors for Scripture placements in many of the area hospitals.

Prior to departing for Paraguay, Pat was praying for the team’s success. Specifically, he was praying about how he could be a servant leader for the team. “When I serve in a blitz, I want to be there to pray with them, encourage them, and help them solve any problems,” he says. “I don’t want to get in the way, so I serve them as we work together in the Lord.”

Sharing The Gospel With Paraguay’s Students

As Gideons arrived at the schools throughout the area, they were warmly welcomed by the schools’ principals and teachers. Going from classroom to classroom, the Gideons would often first present each teacher with a Scripture. Seeing their teachers gladly receive a copy of God’s Word inspired students to take a copy as well.

Gideons were allowed to then share with students that God’s Word is an expression of His wonderful love for them. They explained the different sections of the New Testaments, pointing to the Helps in the front and the plan of salvation and Decision pages in the back.

Don Asheim of the Bismarck Camp in North Dakota was sharing God’s Word at one of Paraguay’s university campuses. Don is a retired engineer and a member of Bismarck Community Church. He enjoys using his tech skills to assist others in his camp and state association in carrying out their ministry through The Gideons International. As a man who tends to be quiet by nature, Don was relying on the Lord’s strength to help him.

During a slower period of the distribution, Don noticed a young man sitting outside the campus gate. He walked over and gave the young man a Scripture, and then stepped back inside the gate and continued handing out New Testaments to students as they passed. A little while later, he noticed the young man was reading the New Testament. Don and his translator, Cesar, approached him. Speaking through Cesar, Don asked the young man if he had any questions.

“What is this book about?” asked the young man, whose name was Roberto. As Cesar translated, Don explained the Gospel and then pointed out the plan of salvation page. After walking Roberto through several verses, they asked if he would like to pray to receive Christ. In the moments to follow, the translator led the prayer as the Roberto accepted Jesus as his personal Lord and Savior.

Gideons in Paraguay were grateful for the warm reception they received at the schools. However, Pat has seen enough changes in his own homeland over the decades to know the climate for open evangelism in schools can change.

He shared a precautionary message with the team. “Don’t take this for granted. Pray and thank God for these open doors, and continue to ask that He’ll keep the doors open.”

Another blitz participant, Dennis Holcombe, is a retired CPA and a member of Mid-Cities Baptist Church in Westminster, California. At home, he loves sharing the Gospel with others as he offers them Personal Workers Testaments. In Paraguay, Dennis found many more opportunities for sharing God’s Word.

At one university campus distribution in Paraguay, Dennis presented New Testaments to two young men who volunteered to assist in translating for the Gideons.

“Are you a born-again believer?” he asked the first young man, who paused and then replied, “I don’t know what you mean.”

Dennis asked the second young man, “If you were to tell someone how to get to Heaven, what would you say?”

That young man hesitated and responded, “I don’t know.”

Dennis then took the opportunity to witness to the two men. Both responded by praying to receive Jesus as Lord and Savior. A third young man was a mature believer and was close friends with the two others. He committed to disciple his two friends through daily Bible study.

As Pat Corkery spoke to a church congregation in Asuncion, his wife Cynthia, and their daughters, Susie and Linda, were back home in Washington watching the event live through the church’s online streaming video.

Throughout the week, team members like Pat received texts from family members and fellow camp members. “My camp is very interested in what we do in these blitzes and are very spiritually supportive,” Pat says. “It’s a blessing to be lifted up by them when away on these travels.”

At one hospital, Gideon Larry Wright approached a patient who was there with his wife. The couple was excited to see a Scripture being placed by the bedside. “Thank you,” they told the Gideons, “We were just saying how we wished we had a copy of God’s Word. And now, you’ve given us one.”

“Our God is an on-time God,” Larry replied.

The man explained he was awaiting surgery to remove a tumor. Larry and other Gideons gathered around the Christian couple and prayed. The couple thanked them for placing Scriptures and for bringing them a sense of peace as well.

On Friday, Gideons made a Scripture distribution to Paraguay’s military responsible for guarding the Paraguayan President, Congress, and the capital city of Asuncion. Prior to the distribution, a special ceremony was held including a military parade. 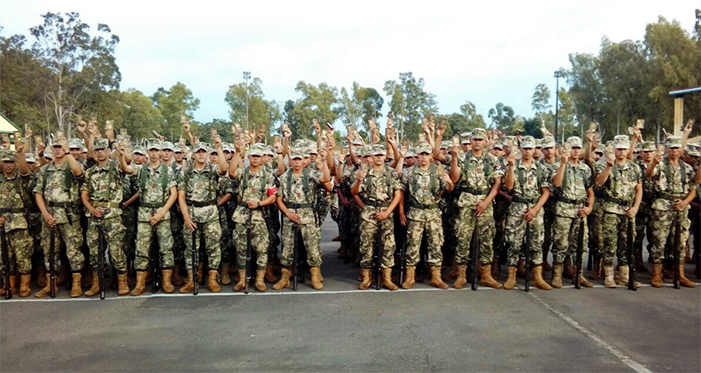 The National Evangelical Chaplain of the Armed Forces is Gumercindo Oviedo Sanchez. He accompanied the Gideons in each distribution to the military. He is very familiar with The Gideons International as he was a member himself, prior to becoming a chaplain.

“I have the honor, in my position, to express my most sincere gratitude for the provision and distribution of the Word of God,” he told the Gideons. He also commended Paraguay National Field Representative Guillermo Voucher for his diligence in fulfilling his ministry.

Gratitude for the Blitz Results

By the end of the blitz, Gideons and Auxiliary had placed and distributed 158,870 Scriptures, surpassing their goal for the week. They also shared the ministry of The Gideons in seven churches and received combined offerings of approximately USD$3,500. Additionally, the Lord led several new Gideons and Auxiliary to join during the week.

First-time blitz participant Richard Dykstra said, “The best way for me to express my overall experience is to say the only regret I have is that I did not do this sooner.” He says he hopes to serve again in a future blitz.

Pat also expressed gratitude for the relationships formed with fellow members of The Gideons while serving in blitzes. “The relationships you form with these brothers and sisters with Christ is like becoming a part of a family. We have a common purpose and vision. We love souls and the Lord,” he says. 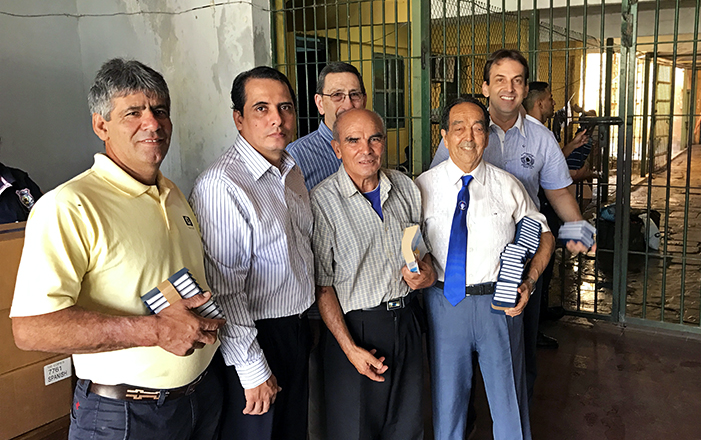