If you were to invite company to your home from out of town, what directions would you give them? Perhaps, you would simply start by giving them your address. Next, they would plug that address into a smartphone’s maps application and, because of data that has been programmed and coded, the app would tell them turn-by-turn where to go.

Because such technology is readily available, you can thank Dr. Gladys West, an Auxiliary from Sutherland, Virginia.

Learning Her Way through Town

The town Gladys West was born in is Sutherland, Virginia—a community where people spent long hours working in fields and gardening to provide for their family. She remembers walking three miles one way to a little red school that had only one teacher for students in seven different grades. It was not until her high school years that she rode a bus to a larger school with more students, teachers, and curriculum. Gladys’ mother worked at a tobacco factory, and her father was a farmer who also worked for the railroad.

Gladys, along with her sister and two brothers, grew up in a Christian home where going to Sunday church services was a priority and reading from the Bible was a regular occurrence. She remembers this part of her life fondly. “I don’t ever remember a time where Jesus and His Church were not a part of my life,” Gladys recalls. With great influence from her parents, she accepted Jesus Christ as her personal Lord and Savior as a young girl. Through the years, her devoted Christian faith has kept her grounded.

“I don’t ever remember a time where Jesus and His Church were not a part of my life.” –Dr. Gladys West

As grateful as Gladys was for her faithful parents, friends, and church family, she had no desire to stay and work on the farms in Sutherland, Virginia. She desired more and saw education as her way out.

Navigating a Path to Success

Upon graduating from high school in 1948, Gladys received a scholarship to attend Virginia State College (now Virginia State University) in Petersburg, Virginia. “I didn’t even have a car, but they told me to come anyway,” Gladys remembers. She graduated in 1952 with a Bachelor of Science in Mathematics. She found it difficult to find employment after graduation and eventually took a position in Waverly, Virginia, as a math and science teacher. Two years later, she went back to Virginia State to obtain a Master of Mathematics degree. After graduating in 1955, she took another teaching position, this time in Martinsville, Virginia. 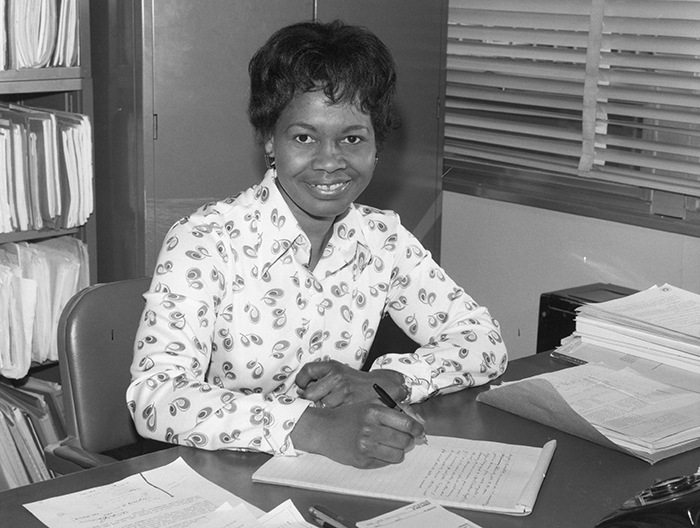 In 1956, Gladys was hired at The Naval Proving Ground in Dahlgren, Virginia, (now called The Naval Surface Warfare Center) as a mathematician where she worked in computer programming and coding. Her husband, Ira, was also employed at the center. Over time, the couple was blessed with three children.

For the next 42 years, Gladys created and coded several programs. In the midst of all this programming and coding came her most significant professional accomplishment. Gladys helped develop the coordinates for the first Global Positioning Software (GPS)—technology that still helps millions of people all over the world get from point A to B.

At the same time, she earned a second master’s degree—this time in public administration, from the University of Oklahoma. After retiring in 2000, she completed and received her PhD from Virginia Tech in Public Administration. Gladys says education has always been important to her growth and attributes it as the vehicle God used to allow her to be a part of such special work.

On Track with God’s Direction

While working in Dahlgren, Gladys and Ira became good friends with members of The Gideons. Over the years, those friends would continue to invite the couple to join in the mission of winning people to Jesus Christ. Seeing the eternal value and benefit of such a ministry, Ira and Gladys joined the Association in 2001. “I love the family atmosphere of The Gideons,” says Gladys.

For the past 17 years, Gladys and Ira have served together with Gideons and Auxiliary in Dahlgren, Virginia, reaching people for Christ. Today, they enjoy sending out cards to local pastors letting them know they are being uplifted in prayer. They join other local camps in the area for a large Scripture distribution at the Virginia State Fair, where last year 14,000 people were exposed to the Gospel.

“I love the family atmosphere of The Gideons.” –Dr. Gladys West

Just as Gladys has used her career to help people easily get from one place to the next, we are grateful for the many other believers like Gladys and Ira in ministry—helping people in this life prepare for eternity.