Vernard K. Williams was born and raised in Philadelphia, Pennsylvania. Shortly after graduating high school, he enlisted in the United States Army. Five years after an honorable discharge, he was offered a job in Los Angeles, California, which kick-started a 30-year career in Information Technology. He began as an operations manager, working in various industries such as aerospace, law enforcement, mortgage, and federal government. Such a vast scope of opportunity allowed him to travel the world.

It wasn’t until the summer of 1978 that Vernard decided something was missing in his life. His wife, Helen, held a weekly Bible study in their home for the ladies at church. One night, Vernard overheard the spiritual conversation coming from the family room and decided he would try to read the Bible. He was in college at the time, so he picked up the large book intending to read it like any other novel or textbook. “I opened it to the first page,” he says. “But it was not making any sense, so I put it down and turned on the radio for some James Brown.”

However, Helen had left the channel on a Christian radio station. As Vernard listened to a song reflecting on Psalm 27, he felt his heart open to the message. He picked up the discarded Bible again and was amazed as the words on every page he flipped through spoke a very real truth about his life. “The Holy Spirit convicted me right then. I said a prayer asking for forgiveness and guidance. I asked God to make me into the man He wanted me to be. I have indulged in the Word of God ever since,” he says.

The following Sunday, he woke overjoyed. He was ready for church before anyone in the house. “It seemed Helen and the kids were moving so slowly. I just told her I’d take the bus and meet them at church. I couldn’t wait to go.” When he arrived at the bus station, the bus was not there, so he decided to walk the six miles to church, arriving an hour early. The world has since moved on from that night in ’78, but Vernard’s life in Christ is as new today as it was then.

He continued to travel frequently on business and began to realize he had a gift for quickly connecting with others and building relationships with strangers. While an excellent skill for a businessman, Vernard knew it was God-given.

He decided to take evangelism classes at the International School of Theology in San Bernardino, California. He remembers watching his evangelism professor, Dr. Bill Iverson, share the Gospel with strangers wherever he went. “Dr. Iverson was more than my professor. He was my spiritual mentor,” recalls Vernard. Dr. Bill Iverson is best known for his involvement with the creation of Campus Crusade for Christ (today known as Cru), the student-led evangelical movement that has spread internationally since the 1950s. “Dr. Iverson took us on field trips to different parts of Los Angeles,” he says. “He had this gift – no matter what part of town we were in, I saw people drawn to him. People of all walks of life gave their lives to Christ. I was amazed. Being around Dr. Iverson stirred up a spiritual gift within me, and I answered the call to serve.”

“For those of us who have been Christians for a long time, we sometimes forget what it was like to first think about the precepts of God. If we overcomplicate the message with our Biblical knowledge and theological words, we can get in the way of the simplicity of the Gospel. So, when we are engaging in personal witnessing, we have to put aside our habits and judgments before we can have a meaningful conversation about God with a person.” Vernard keeps his focus on the soul instead of the personality of the individual.

“When I’m talking to someone, I am always in prayer. I just ask the Lord to allow me to be a part of the process whether I’m a planter, a waterer, or a harvester. The harvest energizes me. When someone gives their heart to the Lord, it’s like a winning touchdown with three seconds left on the clock,” he says.

During his time studying under Dr. Iverson, Vernard also learned the value in preparation through prayer and meditation. “You have to have a systematic way of spending time with God. The Bible says, ‘…he who is in you is greater than he who is in the world.’ (1 John 4:4) That’s the kind of power I want on my side.”

In 1984, God placed a desire in Vernard’s heart to build his prayer life through intercession for others. He began collecting index cards—each bearing the name and request of someone asking for prayer. “I treat the cards as more of a covenant between me, God, and the person filling out the card. Matthew 18:19 says, ‘Again I say to you, if two of you agree on earth about anything they ask, it will be done for them by my Father in heaven.’ I trust the Lord completely on His Word, and just pray Scripture over the cards as I commute or go about my day.”

The physical evidence of his heart for people is outgrowing five filing cabinets filled with prayer cards. However, even more valuable is the spiritual evidence found through countless answered prayers and changed lives due to Vernard’s faithful hours before the Lord. “It’s a privilege to be part of the process—to feel the Holy Spirit work through you.”

In 2005, two Gideons visited Vernard’s church in Ontario, California. He had no idea what being a Gideon meant, but as the men told stories of people coming to the Lord, they had his full attention. “Before I was a Gideon, I felt like I was out there all by myself. Listening to how God was using this group of men, I instantly saw the ministry as an aircraft carrier for evangelism. I had been a fighter pilot flying solo. I wanted to be on the front lines with these men.” When the service was over, Vernard wrote a check and filled out a membership application on the spot.

The following Saturday, ten to fifteen men of the Ontario Camp met at a local restaurant for prayer. At first, Vernard was a quiet attender. He took in all the details of the prayer breakfast meeting and observed the well-organized and efficient manner in which the meetings were held. “The inner-workings of camp life really impressed me. The men carried out ministry like a business, but we all knew it was much more. Being an organized guy, I knew right off this was the place for me.”

“Before I was a Gideon, I felt like I was out there all by myself. Listening to how God was using this group of men, I instantly saw the ministry as an aircraft carrier for evangelism. I had been a fighter pilot flying solo. I wanted to be on the front lines with these men.”

Vernard was quickly voted in as camp chaplain and retained the position for three consecutive terms. He was camp president for a time afterward before accepting the position of state area director. His wife, Helen, was also offered the opportunity to serve as Auxiliary state area director. “We were often able to travel together doing the work of The Gideons. I count it all joy to be serving next to my wife, who to this day so clearly portrays the core values of this Association.” Vernard and Helen always shared a desire to work in ministry together, and Vernard credits opportunities provided through The Gideons with much of the spiritual growth in the most recent years of their marriage of 41 years.

Whether on ministry business or as tourists, Vernard and Helen love to travel. “I never separate the two,” says Vernard. Traveling through Thailand, Indonesia, or Snellville, Georgia, he never passes up an opportunity to get together with the men of God. “No matter where we go, I always make sure to find out where Gideons are meeting.” He sees making these connections as opportunities for Kingdom building. “While traveling, I know if the Lord leads me to share with someone, and that person accepts Christ, he or she is going to need some spiritual guidance. So, I want to make sure I know someone in that city who will be able to follow up after I leave.” 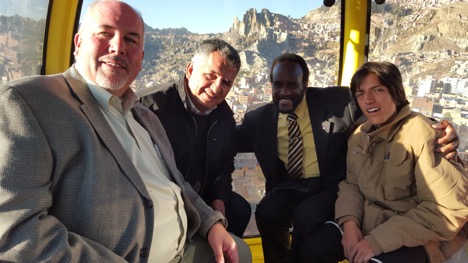 In 2007, Vernard was diagnosed with cancer. The enemy took a good shot, but God made a way, and Vernard was miraculously declared cancer-free in 2012. Four years later, the enemy struck again. “It was a Friday. I was told the cancer was back and had metastasized into my lungs, bones, and chest cavity.” He laughs softly thinking about those following three weeks in the hospital. “I remember calling my Gideon friends, and I said, ‘Black Hawk down, Black Hawk down. I need some Scriptures!’”

The Gideons in his camp area were quick to rally to Vernard’s side. Anyone who knows Vernard could have guessed what would happen next. Over the next three weeks, he was able to share 75 New Testaments with visitors and hospital staff. “I guess I made a name for myself. When they took me into surgery, the doctor asked before putting me under if I would like to pray for him and his staff before they carried out the procedure. So, of course, I reached out for his hand, and we all prayed as I lay there on the gurney.”

This past September, Vernard learned the cancer had crept back in, yet again. In a recent Facebook video post, he shared inspiring words while receiving an eighth round of chemotherapy. He sat wrapped in a blanket and sporting a Philadelphia Eagles hat, his wide smile unfazed by the persistent beep of hospital machinery. “It’s a blessing to be here on the front line for the Lord. He told me to count it all joy when I face various trials and affliction and hardship… because it’s the testing of my faith…and when the testing of your faith has had its full effect on your life…the steadfastness of the Lord becomes part of your DNA.”

“A peace that passes all understanding guards my heart and my mind. When my mind begins to wander like a runaway child, I can cast all my imagination on the truth of Scripture and bring every thought into captivity,” he continued. “I take control of my thought life by vetting it through meditation on the Word of God.”

“I want to tell you warriors for Christ out there – don’t give up, don’t give in, stay the course, and stay strong. Live every day of your life on purpose. I’m a walking miracle, and I’ll testify to His power each and every day I walk this earth. My God is good—and I mean all the time.” 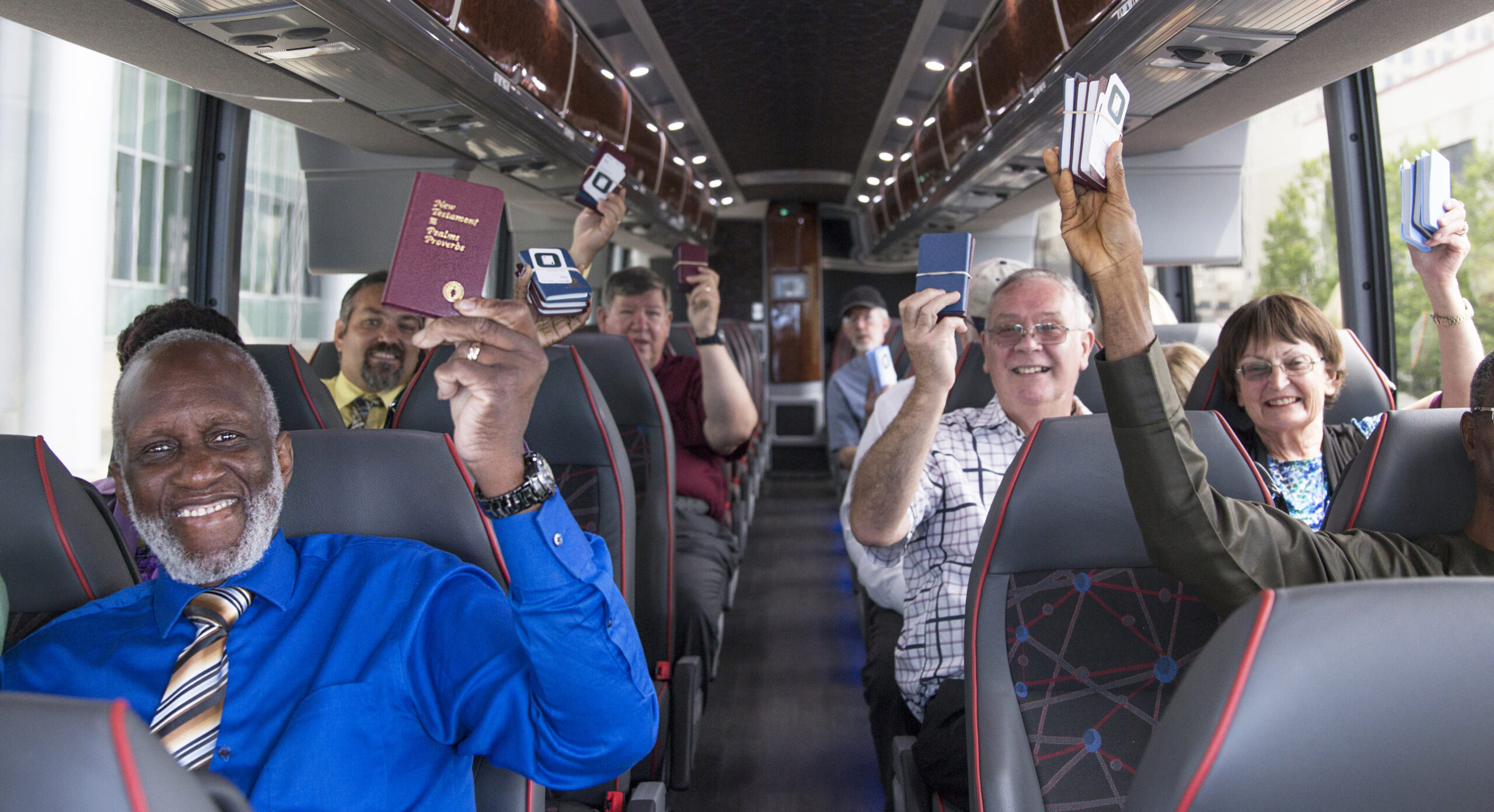