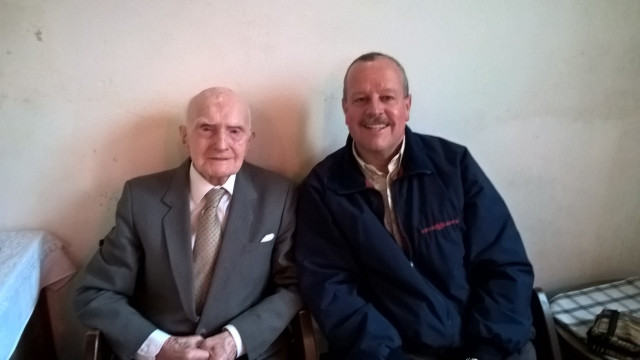 This morning I decided to visit some friends who worship in St Clements Church in Neyland, Pembrokeshire.

As I sat by my friend Betty, a birthday card was handed to me to write a greeting in. I was told it was for Stan who will be 102 years old later this month.

After the service I was having a cup of tea and, seeing Stan in his best suit looking very smart, I decided to have a little chat with him. Stan looked familiar to me and I asked him if he had been present when The Gideons had given a presentation at the church just a couple of years ago. Stan replied that he had, and that he had later received a large print New Testament and Psalms from The Gideons as he now had trouble reading his small Gideon New Testament.

I had been at that presentation and I remembered meeting Stan after the service and he told me how he got that little New Testament. I was blessed that he repeated the story to me again that morning, so that I can share it with my Brothers and Sisters.

Many years ago, Stan’s son Terrence was seriously ill in Morriston Hospital. Whilst in hospital, Terrence was given a Gideon New Testament for his personal use. Sadly, Terrence passed away at the age of only twenty two and his father Stan received the little Testament and took it home.

I remember when we first met Stan and, with a small tear in the corner of his eye, he shared how he had read that Gideon New Testament every day, practically wearing it out. It had meant so much to him.

Later on, his vicar Rev Alan Chadwick, had emailed me to see if we might be able to provide a large print Gideon Testament for Stan, so that he might continue to enjoy God’s Word as his eyesight is now failing. Thankfully we were able to provide the largest size Testament that The Gideons have printed and I was able to drop it off for Stan.

I was told by Alan that the Testament had been very well received and was a great comfort to Stan as he passed the age of 100 years old.

So this morning, after realising who Stan was, I asked him how he was finding the large print Testament. “It’s the best thing I have ever been given” was Stan’s firm reply, wagging his finger as he said those words with a smile. “I keep it in the kitchen and read it after breakfast every day and it’s on the shelf for everyone to see!”

I don’t know who in the Swansea area gave Stan’s son, Terrence, that first Gideon New Testament whilst he was in Morriston Hospital, but I do know that it has been well loved and a great encouragement, especially to Stan. That little New Testament is still treasured by Stan but as he reaches 102 years young he is very, very grateful that the Gideons also do Testaments in large print!

We may never know where our Gideon New Testament and Bibles will end up, or whose lives they may touch on their journey…but God knows, and that’s good enough to encourage me and my Gideon friends to keep giving them out here in South West Wales.