As Christians, we are called to make disciples. In ministry through The Gideons International, Gideons and Auxiliary accomplish this calling by associating together for service, sharing personal testimonies, and placing and distributing copies of God’s Word. Our ministry requires steps of faith. We never know how the Lord will use a single copy of His Word to touch lives, but we trust He always will.

Over the past several months, a number of countries have hosted International Scripture Blitzes, including Madagascar and Spain. While these are two countries with seemingly different cultural perspectives on the value of God’s Word, the Lord used Gideons and Auxiliary in both to reach others with the Gospel.

No problems in Madagascar

Madagascar is a mostly rural country. With a per capita Gross Domestic Product (GDP) of US$1,500, it is also one of the poorest countries in the world. The Gideons International first organized in Madagascar in 1979. Today, there are 75 Gideon camps with a total of 585 Gideons and 481 Auxiliary in Madagascar.

The blitz committee in Madagascar was chaired by Dr. Raminoelina from Madagascar’s Antananarivo Analakely Gideon Camp. “Dr. Raminoelina was undoubtedly the Lord’s man for this job. He inspired, encouraged, and challenged me every day,” says blitz team leader Dennis Donnelly with the Osage Gideon Camp in Kansas.

There are seven Gideon camps in the city of Antananarivo, and each camp had four teams working each day. Commitments from 103 Gideons and 72 Auxiliary to help with the blitz, resulted in 28 teams.

The unofficial name of this blitz could be the “No Problem Scripture Blitz.” When Donnelly met with the local blitz committee, the first question he asked Dr. Raminoelina was, “The goal is 200,000 Scriptures, which is a large goal. Can we make the goal?”

“Do we have a car, driver, and interpreter to go with each team every day?” Donnelly then asked.

“Does every team have a list of at least six schools to visit each day?”

“Have the Scriptures been pre-delivered to the schools?”

“Have appointments been made with each school so they know when we will be coming?

In every instance, Dr. Raminoelina’s assurances proved true for accomplishing the mission. Teams were assigned cars, drivers, and interpreters; appointments were made with every school where distributions were to take place, and the Scriptures were pre-delivered, secured in storage, and waiting for Gideons when they arrived.

“We visited 763 schools, and as far as I know, we had no problems,” says Donnelly.

Schools welcomed Gideons with open arms. In most cases, as Gideons arrived, students were gathered together in one assembly, which allowed Gideons to present the Gospel message and distribute personal copies of God’s Word to each student, all in a single gathering. 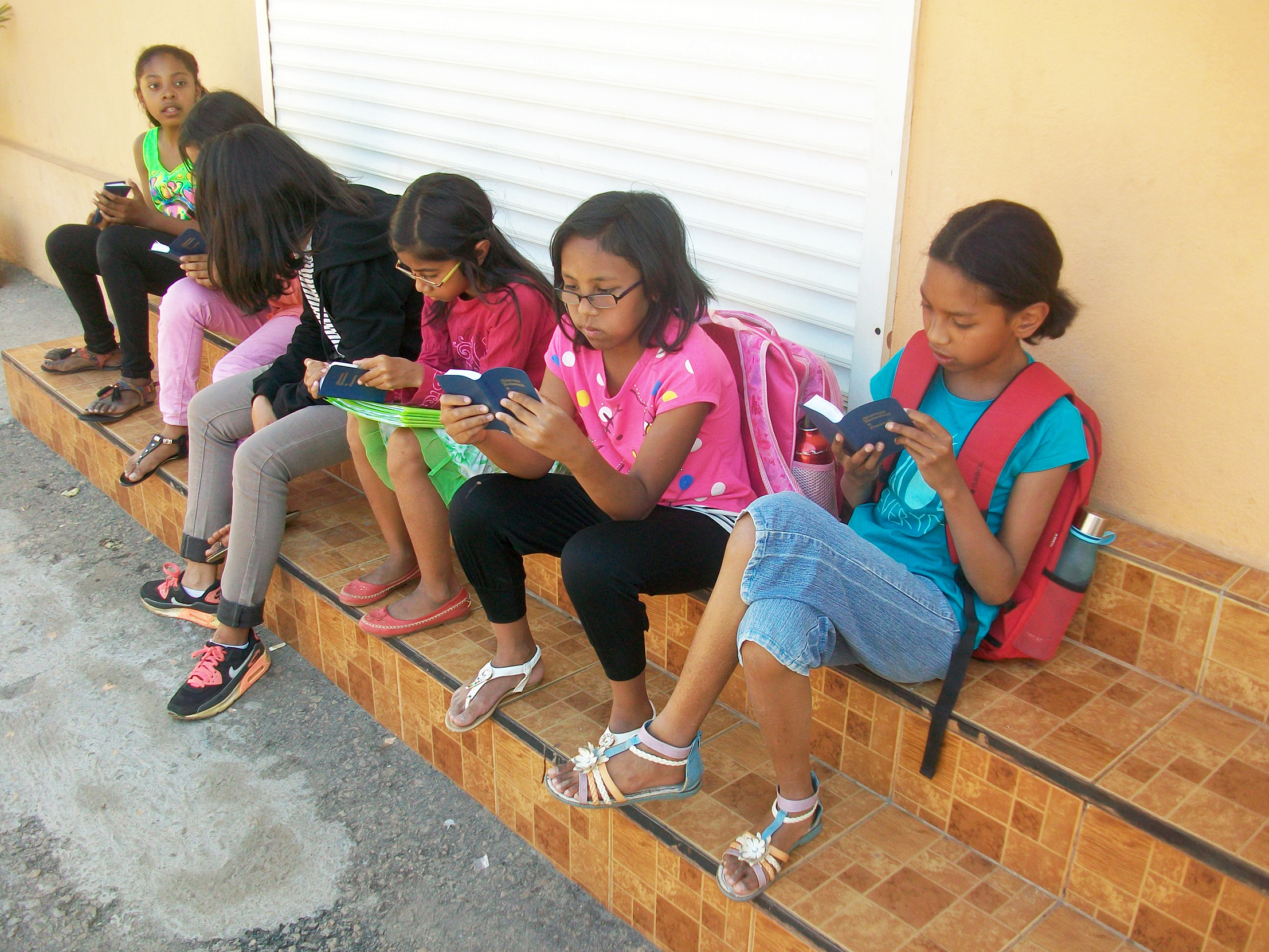 Many team members expressed how humbled they felt to be used by God to reach so many students at once.

Distributions at university campuses were just as successful. Five Gideons were distributing Scriptures at one large university. The team was originally supplied with 2,500 New Testaments, which were distributed in one hour, averaging 41 people per minute receiving a Scripture. Many students sincerely thanked the Gideons for what they were doing.

By the end of the week, 300,629 Scriptures were placed and distributed by Gideons and Auxiliary at schools, universities, hotels, hospitals, jails, and other approved locations. The majority of those who received a Scripture would likely never have the financial capacity to purchase one.

Bjorn Berg, a Gideon from Germany who served on the blitz team, was excited for the receptivity to the Gospel in Madagascar. It was a sharp contrast to the challenges he experiences in terms of sharing God’s Word at schools in his homeland.

“It is incredible that the school gates here are widely open for us to distribute God’s Word.” Berg was further encouraged that the Madagascar school headmasters asked Gideons to come back to their schools for future distributions.

It was a marvelous experience for me to be able to give New Testaments to the Malagasy people,” says Berg. “Now there are 300,000 more road signs in Madagascar leading to Christ.”

Steve Stanley from the Grand Mesa Camp in Colorado, who also served on the team, was overjoyed in regards to the response. “I was truly amazed at how open and eager to receive God’s Word the people of Madagascar were. Their attitude was completely different than what I encounter in the USA.”

a different world in spain

Madagascar and Spain are just over 5,000 miles apart. However, they are much further apart in terms of culture and economic conditions.

More than half of Spain’s population of 48 million people identifies as Roman Catholic. Evangelical Christians account for a very small percentage of the population. The first Gideon camp was organized in Spain in 1968. Today, there are 247 Gideons and 109 Auxiliary serving in 47 camps in Spain.

This past April, Spain hosted an International Scripture Blitz in the city of Granada. Standing on a street corner, the sight of new cars and people dressed in modern attire make it apparent the overall culture in Granada is significantly different than that of Madagascar. With a per capita GDP of US$36,500, the people of Spain enjoy a high standard of living.

José Maria Bermejo from the Madrid South West Camp serves as church ministry coordinator for The Gideons International in Spain. He was very instrumental in the blitz planning. Bermejo says there is a real lack of interest for God’s Word in Spain’s Roman Catholic community and a pervasive indifference to all things related to God throughout Spain. He says those two factors make it very difficult to share God’s Word with the people of Spain.

However, Gideons were faithful to do their part during the blitz week. Scripture distributions took place at 12 schools, 16 universities, and at the offices of the national and local police, as well as the civil guard.

Security personnel on university campuses kept a close eye on the distributions. In accordance with local university policies, as well as our own Association policies, Gideons faithfully shared copies of God’s Word with those students who were open to accepting one. As they had opportunity, Gideons shared their own personal testimonies, further explaining to students how the Lord had worked in their lives.

While there were reports of many students refusing Scriptures, and even in some cases handing them back, Gideons remained positive throughout the distributions. They were encouraged by positive comments from university professors who thanked them for doing an extraordinary job in sharing God’s Word with the students.

Pastors of the evangelical congregations in Granada were very supportive of Gideons serving in their community. Pastor Manuel Cabrera provided housing for several Gideons who had traveled from other parts of Spain. One church also provided a new van for Gideons to use during the week.

Gideons gave presentations in eight churches in Granada, and every church was generous in their giving to provide for God’s Word. A Pastors Appreciation Banquet was also held, which allowed pastors to hear how the Lord was working through the ministry of The Gideons International in their communities.

Gideons in Spain diligently work to strengthen relationships with local evangelical churches, as Gideons do worldwide. These partnerships result in more people receiving a copy of God’s Word. “We are sure that the Holy Spirit is working in the hearts of people throughout the city of Granada,” adds Bermejo.

At the end of the blitz in Spain, the team rejoiced that over 22,000 more Scriptures were in the hands of people in Granada than had been there days before.

These two blitzes were complete opposites on many levels, yet God worked through Gideons and Auxiliary to accomplish the single purpose of sharing the Gospel. “We’re called to go and be witnesses,” says Donnelly. “In each blitz, we did what we were called to do.”