Yesterday, bright and early, Jim and Jenny McCallum along with William and June Allen from South Lakeland Branch visited the Army Training Camp at Warcop in Cumbria. Nearly 400 Cadets from the Lothian and Borders Battalion were in the camp for two weeks training. 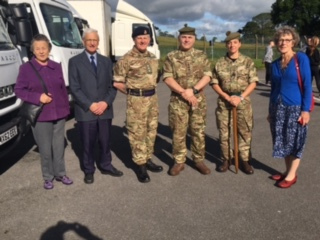 Their Padre, Cameron Mackenzie, a fantastic Christian ambassador, gave the Cadets a wonderful “Gideon Talk” on the parade ground, using the illustration of a sat nav. He emphasised the need for direction and guidance in all the complexities of life. The Bible provides both.

Jim then made a presentation of an Army Cadet Force Badged Camouflage Testament to a 17 year old young Cadet which was gratefully received after which we ended up in the camp coffee shop talking with the uniformed Army Cadet trainers.