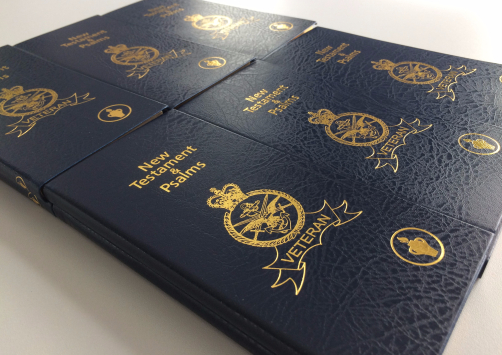 When I was going into the hospital in Irvine, Ayrshire to visit my wife Susan, I was wearing my Veterans Badge and as I was walking down the corridor this man called Joe spotted my badge and said, “Hi! What mob were you in?” Meaning which Regiment was I in. I told him I was in The Royal Scots Fusiliers and asked which Regiment he belonged to and he told me he was part of REME (Royal Electrical Mechanical Engineers).

I said to him, “Before you go I would like to give you this” and I gave him a copy of the Gideons Veterans New Testament & Psalms. I explained to Joe about the Helps section and the Daily Readings at the front of the Testament as well as the Veterans Prayer inside the back pages. I then said that while we are here at the back of the book, if you should make a decision to follow Jesus as your personal Saviour, you can fill in your name and the date in the commitment page. Joe thanked me and went on his way.

Later I met another man named Henry and he also spotted my Veterans Badge and came out with the same question, “What mob were you in?” Again I told him, just as I had done with Joe and he told me he was with a Landing Craft Unit at Normandy. And so the next day I took along another copy of the Veterans Testament and I gave it to him and explained everything I had told Joe.

The next day, before I arrived at the hospital, Henry had spoken to Joe and thanked him for his Veterans New Testament and said how he hadn’t realised there was so much in it, “what a great book” he told Joe.

When I arrived, Joe came up to me and passed on what Henry had told him earlier. I don’t know how Henry had mistook Joe for me but I think it could be down to our similar haircuts, bald and short!

Henry also said he would continue to study it and see what more he could get out of it. So Praise THE LORD and please pray for Joe and Henry.