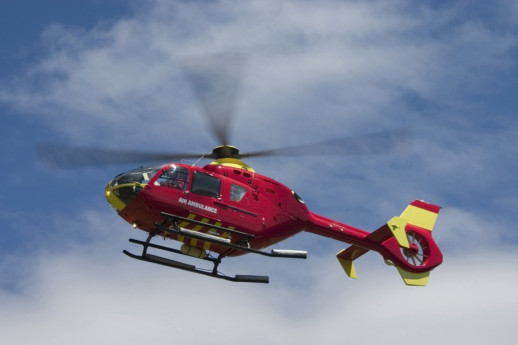 The following story came from Roger Meagor in the Worcester Branch of The Gideons International and it tells of how God used a tragedy to spread the Gospel through Friends of The Gideons.

Alan, one of our church members, was knocked off his bike on the last day of March. He was airlifted to the QE Hospital in Birmingham where he stayed for two weeks. He had damaged three of his vertebrae which left him paralysed from the neck down. In spite of this he witnessed to the many people he met there, supported by his wife Janet who visited him nearly every day.

He was airlifted again by the same helicopter crew to the spinal injuries unit at the Albert Jones & Alice Hall Orthopedic Hospital at Gobowen, near Oswestry. In spite of being confined to his bed and unable to do anything for himself, he and Janet were witnessing again to the different people who were attending to him. He soon gave away the seven Gideon New Testaments he had with him.

He and Janet became Friends of The Gideons which enabled Janet to obtain a good supply of New Testaments.

As time went on he had his 65th birthday and regained some feeling in his arms and legs which meant he could be hoisted out into a purpose designed wheelchair which he operated with his chin! In August he was discharged from the hospital at Gobowen, but before he left he offered each of the medical staff he had met a New Testament & Psalms, several accepting one.

He and Janet are now living in a suitable bungalow near Cirencester with two residential carers as well as other medical personnel coming to see him. The carers change frequently but before they leave they are given a New Testament as well as being witnessed to whilst they are living there. As the carers come from a range of different countries, Alan and Janet are having an international Gospel witness without leaving the house! As Friends of The Gideons they have given away twenty eight New Testaments over the last seven months and have just asked for some more.

We have “good news that will cause great joy” to share and Alan and Janet responded to God’s call on all our lives to be witnesses for Him. As you share the good news this Christmas we trust that you will be blessed and encouraged as you join us in our mission of winning lost souls for our Lord Jesus Christ.