The Gideons International officially began distributing Scriptures to soldiers in 1941 at induction centres under the motto, “arm them with the Gospel too.” While Gideons are mostly known for placing God’s Word in hotels, reaching the lost with the Gospel includes the distribution of Scriptures at the military installations of a number of countries include the USA, The British Isles, The Republic of China, Korea, Latin America, West Africa and Japan. Last year, Gideons placed and distributed over 1.7 million Service Testaments.

As Christians, we are all called into a spiritual battle. Ours is a fight for the hearts of men, women, boys and girls. By sharing God’s Word with the military, Gideons are equipping servicemen and servicewomen with the greatest weapon of all:

For the word of God is living and active, sharper than any two-edged sword, piercing to the division of soul and of spirit, of joints and of marrow, and discerning the thoughts and intentions of the heart. Hebrews 4:12

Just In Time For Pearl Harbor

In 1940, Charles J. Pietsch, a members of The Gideons International, felt led to contact the Chief Chaplains of both the U.S. Army and Navy. He was seeking permission to give a copy of the New Testament to every man and woman in the armed forces of the US who wished to receive one.

So in January 1941, the decision to supply armed forces with copies of God’s Word was approved by The Gideons International and 50,000 Testaments were ordered.

On December 2 1941 some of the fist Service Testaments from The Gideons were distributed to the US Navy personnel at Pearl Harbor. Five days later, Pearl Harbor became ground zero for a date that would live in infamy.

Years later, in 1949, US General Douglas MacArthur sent a telegram to The Gideons International asking that a representative of The Gideons International be sent to Japan to “Make first hand survey of situation [sic]” in regards to distributing New Testaments to the people there stating that, “Your assistance will be of inestimable value.” The Gideons responded to the request and in 1950 the first Gideon Camp in Japan was established.

Veteran Carl Crisp received his New Testament from The Gideons at an induction centre in Houston, TX. Crisp served in the US Army as a UH-1 helicopter crew chief during the Vietnam war. “I carried my New Testament with me at every duty station during my time in Vietnam. It was a comfort to me – a constant reminder of God’s love and of my salvation should I not return home.” Carl says he remembers his comrades also held onto their New Testaments and often saw his fellow servicemen reading the Scriptures. Today, Carl serves the Lord as a Gideon in the Palestine Camp, Texas.

One way The Gideons International has been able to reach servicemen and servicewomen is by working through military chaplains throughout the world. Michael Kelly, Chaplain at Fort Jackson, SC, knows just how great the need for spiritual guidance is among soldiers. “With every new group of soldiers that comes through for training, I get to see an entire cross-section of American and really from around the world. They come from all walks of life, with the same problems we all face, most of them looking to fill a void. It is at this moment that they reach out and we place a book in their hands – the New Testament provided by Gideons.”

Answering Another Call To Active Service

While disembarking from the U.S.S. Breckenridge after its return from the Korean War, serviceman Orv Room received a New Testament from The Gideons. “Over 50 years later, I still have it in my possession,” says Orv. He says its message transformed his life. In fact, Orv began serving in The Gideons in 1956 and his wife, Corine, joined a year later in 1957. They still serve in the Sacramento North Camp, California.

After graduating from the University of Houston, Jim Blunk joined the military. He attended flight school and became an Army helicopter pilot. While serving overseas in Operation Desert Storm, he noticed a chaplain bringing boxes of New Testaments into the mess tent. Jim witnessed lives being transformed and baptisms taking place in the middle of the desert. Though his father was a pastor and had always taught him about the Lord while growing up, Jim admits he didn’t fully understand what it meant to be a Christian until he was an adult.

In the mid 1990s, Jim was recruited for a different type of service by a retired colonel who also served in The Gideons. Since 1997, Jim and his wife Lannis, have served with the Granbury Camp of The Gideons in Texas, helping to reach lost men, women, boys and girls with God’s Word.

When we introduce soldiers to Scripture, we’re introducing those who are ready to make the ultimate sacrifice for their nation to the One who sacrificed his life for the sins of the whole world.

What’s Happening In The British Isles?

Over recent years we have witnessed a number of our traditional areas of Scripture Distribution in decline and therefore it has been necessary to consider how we can reach those to whom the door is now closed in another way.

The development of Badged Testaments has given us the opportunity to reach people who we wouldn’t usually have access to with the normal Service Testament. Badged Testaments have allowed us to offer Scriptures to people that are often hidden behind protocol, security and other barriers. 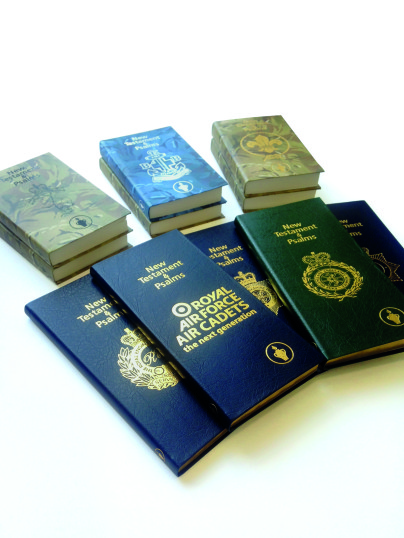 In the past few years, over 270,000 Badged Testaments have been given to members of the Armed Forces, Emergency Services, Veterans and other personnel by members of The Gideons International in the British Isles. We have received reports from Padres in the British Army who have told us that soldiers are carrying these Testaments as if they were part of their uniform. It is our responsibility to ensure that no soldier is missing this vital piece of kit.

We thank God for bringing so many from the trenches to His side through the reading of His Word. Please continue to pray for the safety of the men and women in uniform around the world and for the chaplains who serve them.