It is Monday evening at the Henry County Corrections Facility in west Tennessee. A cold, stainless steel table is cemented to the floor. On one side of the table, four inmates sit on metal stools listening to a member of the local First Baptist Church deliver an emotional devotion. Other inmates stand off in the shadows, riveted to the speaker’s words. Next, a Gideon begins to share God’s plan of salvation. He finally asks the inmates, “Who here would like to know for certain where they will spend eternity?”

Incarceration rates in the United States are currently at record level highs. According to the U.S. Bureau of Justice, over 2.2 million Americans are locked away in state and federal prisons and in local jails. It is the highest population of incarcerated men and women of any country.

Gideons and Auxiliary have been distributing Scriptures to those in jails and prisons since 1916. No matter what the circumstances, there has always been a passion to get God’s Word behind bars.

When Gideons in Henry County first began visiting the local jail back in the 1970’s, conditions were considerably different than they are today. “It was very rough, much like conditions we see in jails in other countries,” says Bob Bertouille, a Gideon from Tennessee. He was instrumental in organizing the first group of Gideons to visit the county’s jail. “It was a rat’s nest. You could not get inside, and you could only talk to inmates through the cell bars.”

However, a change in the jail’s administration and a new corrections facility helped turn things around. When the new jail opened, 173 New Testaments placed by The Gideons International were waiting in the cells.

Bob’s wife, Madalyn, served in the Auxiliary and worked with female inmates. Madalyn spoke about the jail ministry with Anita Berry, a fellow Auxiliary from Tennessee. Madalyn asked Anita to make sure the ministry continued if a time ever came where she could no longer serve. Anita gave Madalyn her word she would.

Months later, Madalyn went to be with the Lord. Her death was sudden and unexpected. Days later, Bob asked Anita if she would pick up the jail ministry where his late wife had left off.

Anita thought, “What am I going to do? I had promised Madalyn.”

Despite her initial apprehension about serving in jails, Anita kept her promise to Madalyn to keep the Auxiliary engaged in reaching female inmates. “It was really hard in the beginning,” she says, “God is still building me.” The Lord has also shown Anita the importance of reaching women behind bars. “The women are forgotten, and it is critical to reach them with the Gospel. They are the ones who will take God’s Word back to their families. In many cases, they will be the single parent raising a family. Without a life-transforming relationship with Christ, when they are released from jail, they will likely return to the same lifestyles that led to their incarceration.”

“The women are forgotten, and it is critical to reach them with the Gospel.”

Gloria Hill serves in the Auxiliary in Texas. Since she was a little girl, she loved sharing Jesus with people. At that time, she never imagined she would someday share Jesus inside the walls of a jail. The first time she entered a jail block, one of the female inmates asked her, “What are you in here for? Forgery?”

“No,” Gloria responded, “I’m here to tell you about Jesus.”

Gloria had once seen the video testimony of the late Mary Kay Beard, who came to faith in Jesus after receiving a New Testament from The Gideons International while serving a prison sentence. The morning after seeing Mary Kay’s testimony at church, the passage from Jeremiah 33:8 touched her heart: “I will cleanse them from all the guilt of their sin against me, and I will forgive all the guilt of their sin and rebellion against me.” Knowing God forgives the guilt of even those found guilty by courts of law, she enlisted two other women in the Auxiliary to join her in sharing God’s Word with women in the local jail. “We stepped out in faith and went.”

Many of the women Gloria meets in prisons are there because of the dysfunctional homes they grew up in. “Often, they come from homes where the parents were in and out of jail. Many of the women simply want to be loved and are looking to fill that void. They turn to drugs and alcohol to gain acceptance and cope with the pain,” says Gloria. However, those who receive Christ can be released from strongholds in life that otherwise would be much harder to break free from than a jail cell.

Last summer, Gloria and other Auxiliary visited a drug rehabilitation facility to distribute Scriptures. She saw one of the employees of the facility and recognized the name on her name tag. “I know you,” Gloria said to her, “I introduced you to Jesus at the county jail.” The lady recognized her and said, “Oh, Mrs. Gloria, I went away to prison, but when I got out I did not leave Jesus there.” The woman shared how the Lord is now using her to help women break free from the same struggles she had fought prior to receiving the Lord.

Getting the Word Out

Brian Stromsoe has served as a Gideon in the Los Angeles area for decades. As a member of the Pomona Camp, his faithful service in lining up people and resources facilitates the distribution of over 20,000 Scriptures into the Los Angeles County jails each year. During his career as a defense attorney, Brian saw the desperation and hopelessness felt by those facing long prison sentences. As Gideon camps receive worn Bibles that have been removed from hotel rooms during Scripture blitzes, Brian sees those Scriptures are repurposed for jails. The process of refurbishing Scriptures for jails and prisons offers an opportunity to engage pastors and members of churches with whom Gideons have built strong relationships.

“We can get about a hundred Gideons, Auxiliary, and church members together on a Saturday morning and refurbish thousands of Scriptures,” says Brian. “Pastors love it because it gets their members engaged deeper with ministry. We’ve seen church members from the ages of 12 to 98 show up to help.”

The Gideon camp creates an assembly line where Scriptures are cycled through the process of removing covers and replacing them with soft covers that are compliant with jail and prison requirements. 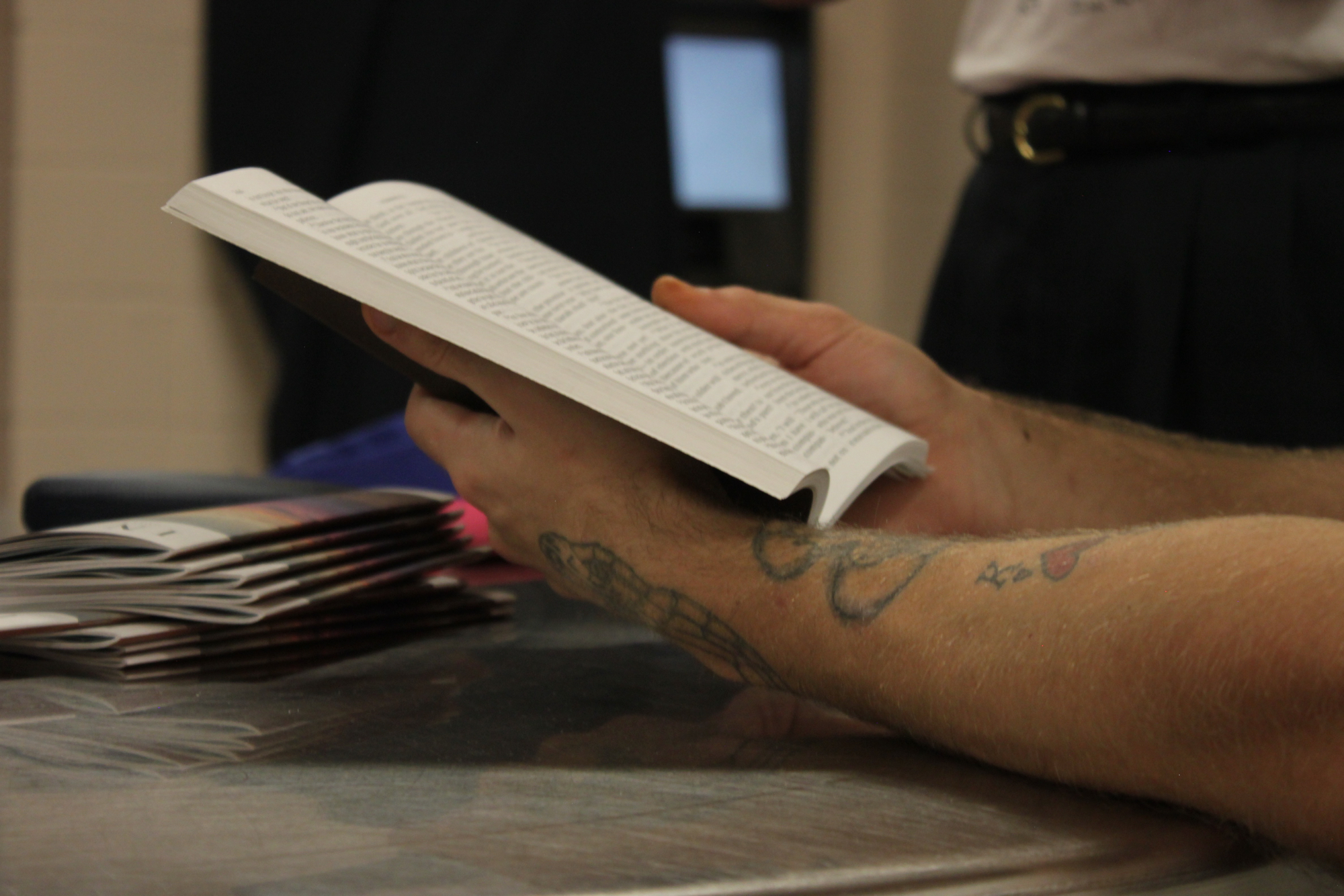 Vern Steedly is a member at First Baptist Church in Paris, Tennessee, where Bob Bertouille also attends. He shares The Gideons’ passion for reaching the lost with God’s Word. He has been involved in reaching out to inmates, thanks, in part, to the members in Henry County. “I was a little apprehensive at first, but that apprehension has turned to enthusiasm.” Vern is seeing what he is doing is making an impact. “Sometimes when we get out of the way, God speaks in a loud and clear manner.”

Dr. Trent Bullock serves as the senior pastor at First Baptist Church where Bob and Vern are members. He is excited to see members in his congregation getting involved with The Gideons International in jail ministry. “It always does a pastor’s heart good to see members become involved in ministry, especially ministry outside the walls of the church,” he says.

A Step of Faith

Anyone who has served in jail ministry will tell you it requires a big step of faith. Jesus reminds us to show no partiality to others on the basis of their status in life. He knows the loneliness and desperation that fills the hearts of men and women locked behind bars. Therefore, He entrusted His followers with the responsibility of visiting them and sharing the Gospel.

Across the world, Gideons and Auxiliary are working with local chaplains to gain access to prisons and have been truly blessed by their experiences. While they arrive thinking they are bringing Jesus to these people, they quickly discover Jesus is already inside and ready to use them.