Venezuela is a country of diverse natural beauty. The South American nation has recently experienced a series of economic setbacks and natural disasters. There is currently a food, water and medicine shortage of critical proportions, as well as a national electricity crisis. Countless men and women now have no choice but to wait in long lines to gain access to basic products such as milk, flour and sugar.

Recently, Gideons in Venezuela welcomed an international team of Gideons from the United States and Australia to conduct a Scripture Blitz in the city of Puerto la Cruz.

The Lord was faithful to provide Gideons access to distribute His Word in schools across the neigbouring cities of Puerto la Cruz and Barcelona. They were encouraged by the joyful receptivity of the students and administrators. Team member David Long recalled, “At one middle school, a group of young people crowded around me. They wanted to hear more about the Bible, and they asked me to teach them how to lead Christian lives. They listened intently as the translator communicated my words to them, and at the end, they thanked me repeatedly for spending time with them.”

This testimony was typical for the majority of schools visited by the blitz teams. “Almost every time we asked school administrators to assemble the students, they did, despite the fact that they only had a limited amount of electricity to use for their school lesson,” said Wayne Kirkley, a Gideon from Georgia. “We then had the opportunity to encourage students to read the Bible every day, and explained that when they got to the back, they would know how to have eternal life in Heaven with Jesus.” By the end of the blitz, thousands of students, teachers and faculty members had heard the presentation of the Gospel. 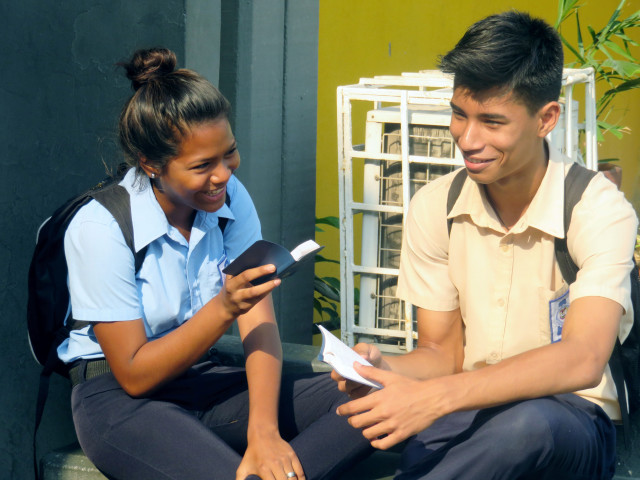 At one Puerto la Cruz police station, the Chief of Police had all his detectives and administrators assemble for the blitz team. “It was a group of about 45 men and women. We told them we appreciated their service and understood the dangers they encountered on a daily basis. Then, we walked them through the Plan of Salvation,” said Wayne. Many of the officers prayed to receive Christ and thanked the Gideons for the work they were doing in their community.

As teams moved through the city, the Lord continued to open doors – often in unconventional ways. One day, a gentleman approached a team of Gideons outside of their hotel. He explained he heard about the “big work” they were doing from a close friend and, as a chaplain in the military, he deeply desired that The Gideons would distribute New Testaments to soldiers stationed in Puerto la Cruz. Just like that, God had provided a way for Gideons to take His Word to the Venezuelan National Guard. 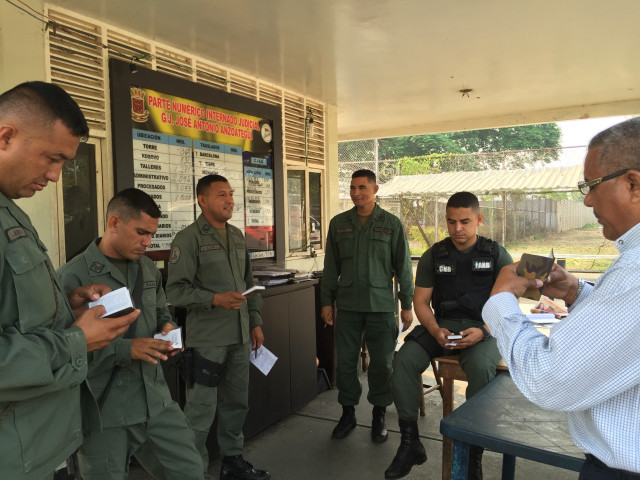 Over 400 New Testaments were distributed to military personnel that afternoon. The soldier assigned to lead the Gideons around the facility heard the Gospel message many times, and before they left, a team member asked him if he believed God’s Word to be real or fiction. After a moment of silence, the soldier replied, “I believe it is real. In fact, my wife is Christian.” He then prayed to accept the Lord as his Saviour and signed his name in the back of the New Testament. Imagine the joy as he returned to his home and reunited with his wife as a new believer in Christ.

Gideons were also able to deliver Scriptures to inmates in a juvenile detention centre, where the maximum age is 19 years old. International team leader Trevor Johns from Nashville, Tennessee, remembered, “We were unsure how we would be received, but when we walked through the door, we were greeted with smiling faces.” Inside, a group of inmates were gathered in a small circle. As the team moved closer, they realised the teenagers were taking advantage of their brief time outside of their darkened cells to have a Bible study.

The were using two tattered Gideon New Testaments. “Many of them had visible scars on their faces and cigarette burns on their skin, giving us a small glimpse of what they had endured in life” Trevor continued. “I was privileged to spend time with that young group of believers, praying with them and encouraging them.” At the end of the distribution, the team had handed out 119 Scriptures, and two men had prayed to receive Christ.

The hard work and organisational planning of local members, as well as the prayer support of faithful men and women around the world, resulted in the distribution of over 189,000 Scriptures in Puerto la Cruz over the course of this one-week blitz. The teams witnessed God move in mighty ways, leaving each participant confident their efforts would indeed ignite a spiritual revival. “There was a tremendous bond that developed between the local and international team members,” said Wendell Terry, a Gideon from Virginia. “Overall, it was an incredible blessing and a truly humbling experience for God to use us in this ministry in Venezuela.”

There are still around 4,000,000 Scripture orders pending in countries around the world because of a lack of funds. Click here to give what you can and help us make a difference in more people’s lives.