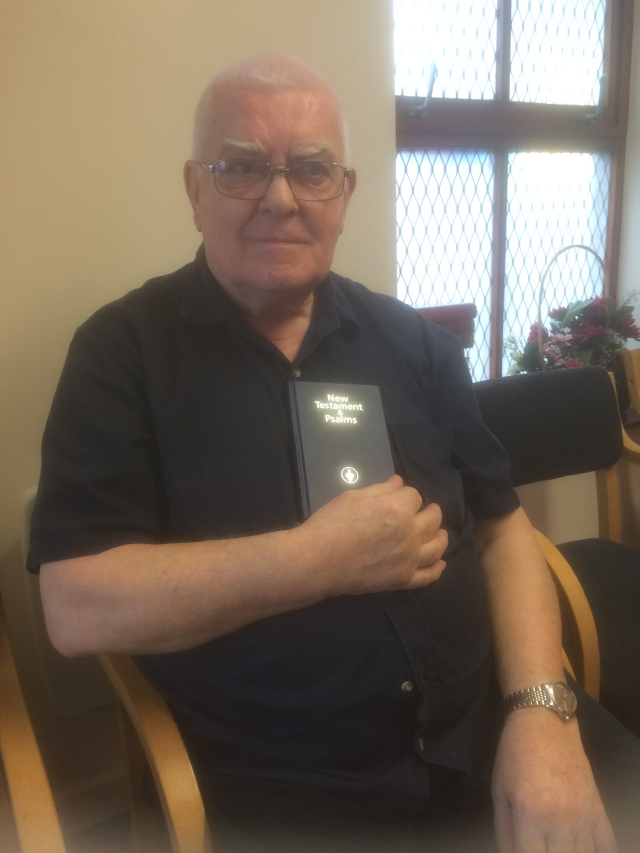 Pictured is Rev. Geoffrey Rumble who was pleased to share his testimony with members of the Bromley Branch of The Gideons and the National Office Team who met with him recently.

Geoff, when he was 40 years old was working long hours as an Industrial Engineer, he visited companies throughout the UK and Germany. These companies used tool steels and his specialty was the heat treatment of the steel and involved some Atomic research.

One day he was in his car on his way to Cornwall from South Wales and felt extremely ill, so had to pull over and was approached by a Police Car. This incident was the start of his sickness, which was cancer. He knew he was ill because he couldn’t eat his Christmas dinner! His doctor sent him to Cardiff Hospital where he subsequently spent 15 months being treated for suspected lung cancer. The prognosis was really bad and his family and friends were preparing for his death.

In the bedside locker, Geoff found a blue New Testament & Psalms placed by The Gideons. He doesn’t know why but he decided to read a Psalm every day.

He was very depressed, but at about Psalm 29 he starting thinking, “when I get out of here” His family and friends were still of the view that he would die, but Geoff’s thinking had changed during the reading of the Psalms. Geoff said the Lord spoke to him and said, “you are going to get out of here.”

By the time Geoff got to Psalm 78, 79 and 80 he was up out of bed walking around the hospital. He started talking to the young men who were in A&E who had got drunk and found his attitude to life had completely changed. He needed treatment for his lost voice and thyroid cancer but recovered through what Geoff was convinced was the Lord’s intervention. He said, “God is good and did a work in my life.” Geoff fully surrendered his life to Christ.

At his home, in Merthyr Tydfil, a minster heard about Geoff’s story in hospital and met up with him and invited him to give his testimony. Soon after, Geoff was asked to lead a failing church down the road with about 10 members, he agreed and it grew to 60 members. The Lord has used Geoff to strengthen a number of small churches ever since and he now serves as the minister at Olivet Baptist Church, Deptford.